Outlaw Platoon: Heroes, Renegades, Infidels, and the Brotherhood of War in Afghanistan (Paperback) 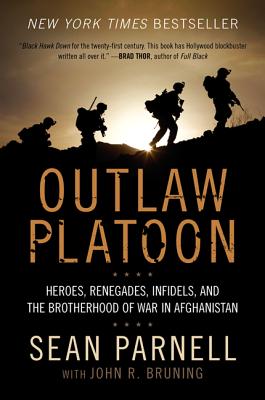 Outlaw Platoon: Heroes, Renegades, Infidels, and the Brotherhood of War in Afghanistan (Paperback)

Acclaimed for its vivid, poignant, and honest recreation of sixteen brutal months of nearly continuous battle in the deadly Hindu Kesh, Outlaw Platoon is a Band of Brothers or We Were Soldiers Once and Young for the early 21st century—a riveting, action-packed, highly emotional true story of enormous sacrifice and bravery.

At twenty-four years of age, U.S. Army Ranger Sean Parnell was named commander of a forty-man elite infantry platoon, the 10th Mountain Division—a unit that came to be known as the Outlaws. Tasked with rooting out Pakistan-based insurgents from a valley in the Hindu Kush, Parnell assumed they would be facing a ragtag bunch of civilians until, in May 2006, a routine patrol turned into a brutal ambush. Through sixteen months of combat, the platoon became Parnell's family. The cost of battle was high for these men. Not all of them made it home, but for those who did, it was the love and faith they found in one another that ultimately kept them alive.

A magnificent account of heroes, renegades, infidels, and brothers, Outlaw Platoon stands with Sebastian Junger’s War as one of the most important books to yet emerge from the heat, smoke, and fire of America’s War in Afghanistan.

Sean Parnell is a former U.S. Army airborne ranger who served in the legendary 10th Mountain Division for six years, retiring as a captain. He received two Bronze Stars (one for valor) and the Purple Heart. He is a passionate supporter of America's military and is currently serving as an ambassador for the Boot Campaign, a national veteran's charity. He lives with his three children in Pittsburgh, Pennsylvania.

John R. Bruning is the coauthor of the critically acclaimed Outlaw Platoon (with Sean Parnell) and of House to House (with David Bellavia). He wrote dispatches from the field while embedded with an infantry unit in post-Katrina New Orleans, and received the prestigious Thomas Jefferson Award for Journalism from the Department of Defense for an article he wrote while embedded with the 3rd Combat Aviation Brigade’s TF-Brawler in Afghanistan. He lives in Oregon.

“Outlaw Platoon put me back on the battlefield again. It’s a heartfelt story that shows how very different people can be thrown together in combat and find a way to make it work. Parnell and the soldiers who fought beside him are all courageous heroes—real bad asses.” — Chris Kyle, author of American Sniper

“Two of the most intense tales of courage under fire I own are Black Hawk Down and Lone Survivor. I now have a third, Outlaw Platoon. It’s an absolutely gripping, edge-of-your-seat ride.” — Brad Thor, author of Full Black

“Outlaw Platoon is an utterly gripping account of what our soldiers endure on the front lines—the frustrations, the fear, the loneliness. . . Here, in these pages, are the on-the-ground realities of a war we so rarely witness on news broadcasts” — Tim O'Brien, author of The Things They Carried

“Outlaw Platoon is an exceptional look into the mind of a platoon leader in Afghanistan; Captain Parnell shares his experiences of leadership, loss, and aggressive military tactics. You can really feel the bonds forged between these brothers in arms as the battle plays out” — Marcus Luttrell, author of Lone Survivor

“At times, I forgot I was reading about a war as I was drawn up in the drama the same way you [are] when reading Krakauer’s Into Thin Air . . . This is a book of probing honesty, wrenching drama and courage.” — Doug Stanton, author of Horse Soldiers

“[A] soulful story of men at war . . . Outlaw Platoon shows us that the love and brotherhood forged in the fires of combat are the most formidable quaities a unit can possess.” — Steven Pressfield, author of Gates of Fire

“Outlaw Platoon is expertly told by a man who braved the heat of battle time and time again. An epic story as exacting as it is suspenseful, it reveals the bravery and dedication of our armed service men and women around the world.” — Clive Cussler

“This book is more than just a rip-roaring combat narrative: it is a profoundly moving exploration into the nature and evolution of the warrior bond forged in desperate, against-all-odds battles. A significant book, not to be missed.” — Jack Coughlin, author of Shooter: The Autobiography of the Top-Ranked Marine Sniper

“Outlaw Platoon is the real deal. It’s a terrific tale of combat leadership that deserves to be studied by all small-unit leaders. The narrative goes beyond the battlefield to depict the maddening nature of the war and the grit of those who selflessly protect us.” — Bing West, author of No True Glory

“Sean Parnell reaches past the band-of-brothers theme to a place of brutal self-awareness . . . [he] never flinches from a fight, nor the hard questions of a messy war.” — Kevin Sites, author of In the Hot Zone: One Man, One Year, Twenty Wars