The Motion of the Body Through Space: A Novel (Paperback) 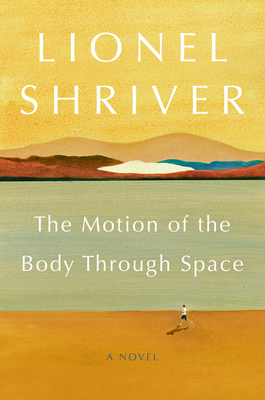 The Motion of the Body Through Space: A Novel (Paperback)

In Lionel Shriver’s entertaining send-up of today’s cult of exercise—which not only encourages better health, but now like all religions also seems to promise meaning, social superiority, and eternal life—an aging husband’s sudden obsession with extreme sport makes him unbearable.

After an ignominious early retirement, Remington announces to his wife Serenata that he’s decided to run a marathon. This from a sedentary man in his sixties who’s never done a lick of exercise in his life. His wife can’t help but observe that his ambition is “hopelessly trite.” A loner, Serenata disdains mass group activities of any sort. Besides, his timing is cruel. Serenata has long been the couple’s exercise freak, but by age sixty, her private fitness regimes have destroyed her knees, and she’ll soon face debilitating surgery. Yes, becoming more active would be good for Remington’s heart, but then why not just go for a walk? Without several thousand of your closest friends?

As Remington joins the cult of fitness that increasingly consumes the Western world, her once-modest husband burgeons into an unbearable narcissist. Ignoring all his other obligations, he engages a saucy, sexy personal trainer named Bambi, who treats Serenata with contempt. When Remington sets his sights on the legendarily grueling triathlon, MettleMan, Serenata is sure he’ll end up injured or dead. And even if he does survive, their marriage may not.

The Motion of the Body Through Space is vintage Lionel Shriver written with psychological insight, a rich cast of characters, lots of verve and petulance, an astute reading of contemporary culture, and an emotionally resonant ending.

Lionel Shriver's fiction includes The Mandibles; Property; the National Book Award finalist So Much for That; the New York Times bestseller The Post-Birthday World; and the international bestseller We Need to Talk About Kevin, adapted for a 2010 film starring Tilda Swinton. Her journalism has appeared in the Guardian, the New York Times, the Wall Street Journal, and many other publications. She’s a regular columnist for the Spectator in Britain and Harper’s Magazine in the US. She lives in London and Brooklyn, New York.

The Motion of the Body Through Space is notionally about fitness fanaticism, but it’s really about physical decline and mortality . . . . What’s remarkable is that Shriver, who is at her most lyrical and compelling when contemplating her characters’ ambivalence, is so inordinately assured of her positions on real-world issues that many of us find confounding. — Ariel Levy, The New Yorker

“The prospective thrill of a new novel by the iconoclast Lionel Shriver is located here, in anticipating the skewing of pieties.” — Joshua Ferris, New York Times Book Review

“The fitness industry is a fat target for satire. And Shriver brings all her ferocious wit to bear to mock its hucksters and disciples.” — Ron Charles, Washington Post

“Painfully funny . . . much of it rings true.” — Minneapolis Star Tribune

Lionel Shriver’s The Motion of the Body Through Space is a caustic satire on the modern obsession with exercise in all its lunatic narcissism, with sideswipes at chiding woke culture. But it also contains the most tender passage I’ve ever read on what it means to grow old in a long marriage. — Janice Turner, The Times (UK)

“Provocative and witty . . . the need for us all to stop moving for a moment and reflect on where we are is Shriver’s main subject.” — Times Literary Supplement (London)

“If you are looking for a new take on how to live well when the body is failing, Shriver could be just the difficult, limping fellow traveller you need.” — The Times (UK)

“A cheeky diatribe on a society determined to go to extremes.”
— Booklist

“Scabrously funny. . . . presents a dyspeptic view of people in thrall to exercise. . . . Few authors can be as entertainingly problematic as Shriver.”
— The Guardian