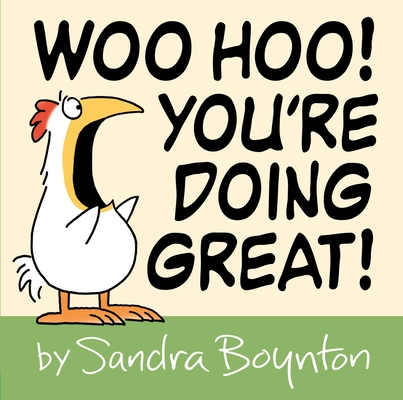 Preorder your copy today to receive a SPECIAL GIFT with purchase! (While supplies last)

Whether you are learning to skate, baking a cake, or even making a mistake, this hilarious and heartfelt rhyming book reminds us that trying our best is reason to celebrate. From children trying to master new skills to adults who had a hard week at work, we all get overwhelmed sometimes and need reassurance. And who better to offer it than a chicken exclaiming: “WOO HOO! YOU’RE DOING GREAT!”

The ideal gift to cheer on kids and adults through life’s milestones--both big and small--including moving up ceremonies and graduations, birthdays, testing out a hobby, starting out somewhere new, and so much more.

Sandra Boynton is a popular American cartoonist, children's author, songwriter, producer, and director. Since 1974, Boynton has written and illustrated over sixty children's books and seven general audience books, including five New York Times bestsellers. More than 70 million of her books have been sold, "mostly to friends and family," she says. She has also written (with Michael Ford) and produced six albums of renegade children's music. Three of her albums have been certified Gold (over 500,000 copies sold), and Philadelphia Chickens, nominated for a Grammy, has gone Platinum (over 1 million copies sold). Boynton has also directed twelve music videos of her songs, including the award-winning "One Shoe Blues" starring B.B. King, "Alligator Stroll" starring Josh Turner, and "Tyrannosaurus Funk" (animation) sung by Samuel L. Jackson. She lives in rural New England, and her studio is in a barn with perhaps the only hippopotamus weathervane in America.

"Woo Hoo! You're Doing Great is a life-affirming reminder for humans and chickens everywhere that they're doing a terrific job just being themselves. It's perfect for parents and babies and children, teachers, friends, great-aunts and graduates. Give it for holidays, birthdays, Tuesdays, or any time you want to let someone know they're doing great."—Ann Patchett