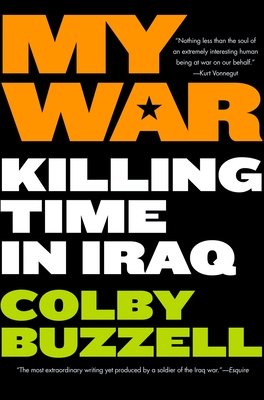 
Usually Ships in 2-3 Days
An underemployed, skateboarding party animal, Colby Buzzell traded a dead-end future for the army—and ended up as a machine gunner in Iraq. To make sense of the absurd and frightening events surrounding him, he started writing a blog about the war—and how it differed from the government’s official version. But as his blog’s popularity grew, Buzzell became the embedded reporter the Army couldn’t control—despite its often hilarious efforts to do so.

The result is an extraordinary narrative, rich with unforgettable scenes: the Iraqi woman crying uncontrollably during a raid on her home; the soldier too afraid to fight; the troops chain-smoking in a guard tower and counting tracer rounds; the first, fierce firefight against the “men in black.” Drawing comparisons to everything from Charles Bukowski to Catch-22, My War depicts a generation caught in a complicated and dangerous world—and marks the debut of a raw, remarkable new voice.

Before enlisting in the U.S. Army at age twenty-six, Colby Buzzell lived in the San Francisco Bay Area. He served over two years, including a year in Iraq.
“I remember reading Colby's journal entries on the internet when he was filing them from Iraq and being amazed at how, besides how heavy the material was, how sharp and vividly intense his writing was. My War is the real deal reportage from the ground. There's no way any reporter could have brought this back. If you care about our brave soldiers in the fray and want to get an insight into what it's really like out there, My War is essential reading...I'll take Colby's word over a journalist's any day.” —Henry Rollins

“Soul-jarring observations and darkly comedic insights into what it really means to be fighting and idling in this war.” —Los Angeles Times Magazine

“Profound, profane...told with irresistible gallows humor and anger devoid of self-consciousness. Give[s] us a much deeper understanding of war.” —Atlanta Journal-Constitution

“A style reminiscent of Hunter S. Thompson...fueled by an anti-authority, punk-rock attitude.” —Poets and Writers

“Striking...with a steeliness that’s both sincere and chilling.” —People

“If military recruitment is down now, wait till the kids read this book.” —Kirkus Reviews

“In gutsy, sometimes profane prose, he takes you on a soldier’s-eye view of the front lines of the war.” —Newsweek

“Captivating memoir about the year [Buzzell] spent serving as an army ‘trigger puller’ in Iraq....though the combat scenes are exciting, this book is actually more engrossing as a portrait of the day-to-day life of a young American soldier.” —Publishers Weekly

“My War is the story of a young grunt trying to survive...What you soon realize about this stranger at the bar, Colby Buzzell, is that he can knock you off your barstool at a moment’s notice with soul-jarring observations and darkly comedic insights into what it really means to be fighting and idling in this war.” —Los Angeles Times Magazine

“Provid[es] more truth than CNN or the army could or would.” —Library Journal

“Incredible accounts of combat from a grunt’s-eye view.” —Rolling Stone

“Funny, often surreal ‘What the @!%# am I doing here?’ account of military life.” —Entertainment Weekly

“Breathtaking...Buzzell’s self-awareness is total and unromantic, his instinct for what matters unrelenting, his writing lyrical, heartbreaking, hilarious, and essential.” —Robert Kurson, author of Shadow Divers

“Raw, sardonic, and thrashingly honest, My War is a stellar grunt’s-eye view of the Iraq war.” —Men’s Journal