Breaking the Silence: Aboriginal Defenders and the Settler State, 1905–1939 (Paperback) 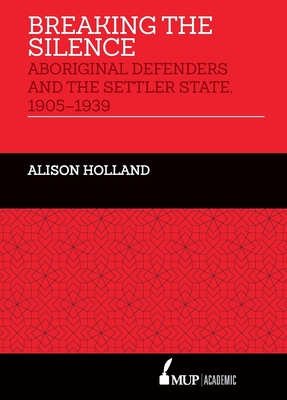 Breaking the Silence: Aboriginal Defenders and the Settler State, 1905–1939 (Paperback)


Email or call for price
Breaking the Silence recovers the conflicted politics of Aboriginal affairs in the first decades of the twentieth century. From 1905, when the report of the controversial Roth Royal Commission in Western Australia was made known to the public, to the eve of World War II, the condition, status and treatment of Aboriginal Australians were leading social questions that generated much discontent and underscored the awakening of a national conscience. Styled the 'new public', defenders lobbied governments to develop policies to ensure viable Aboriginal futures.

In charting aspects of this politics, Alison Holland uncovers the defenders' programs for reform and the responses of governments to them. She shows how the consternation of the defenders was disproportionate to political will. Governments didn't listen or hear. They viewed the issues and solutions in different ways. Where defenders saw a humanitarian crisis, governments identified a colour problem in White Australia and developed policies to eradicate it.

Breaking the Silence shows that there was no 'great Australian silence' on this question in the first half of the twentieth century. While the history books may have been silent, the politics on the ground, in the press, the auditorium, parliament, university, church and mission were anything but. Holland asks why this was so. What form did this politics take, what was at stake and what were the outcomes? In answering these questions the book provides important historical context for the consternation and debates still being had in the Australian polity over Aboriginal affairs.
Alison Holland is a Senior Lecturer in the Department of Modern History, Politics and International Relations at Macquarie University, where she specialises in Australian and Indigenous history. Her work focuses on questions of rights and humanitarianism, feminism, race, governance, policy and citizenship in Australian history broadly. Her book, Just Relations. The Story of Mary Bennett's Crusade for Aboriginal Rights (UWA Publishing 2015) was short-listed for the NSW Premier's Australian History prize in 2016.