From Turnbull to Morrison: Understanding the Trust Divide (Paperback) 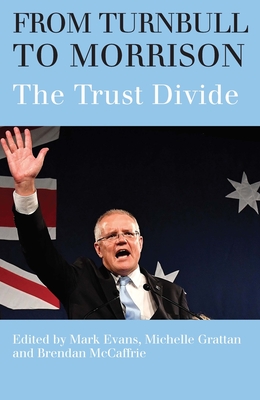 From Turnbull to Morrison: Understanding the Trust Divide (Paperback)


Email or call for price
Is trust between the government and Australians broken? The country's leading institutions have been ranked among the least trusted in the world at a time when the economy has experienced twenty-seven years of economic growth. This has all happened since the 2016 federal election under the revolving prime ministerships of Malcolm Turnbull and Scott Morrison's first term.

Turnbull was the fourth sitting prime minister in a decade to be removed by his own party. What role do these politically turbulent times play in this trust deficit? Scott Morrison has now been elected by the people. What does he and future prime ministers need to do to reboot civic belief in politics? How will history judge the contribution of the Turnbull and Morrison administrations?

In From Turnbull to Morrison well-known political journalists including Michelle Grattan, George Megalogenis, Megan Davis, Virginia Haussegger, Mark Kenny and Katharine Murphy and leading academics such as Frank Bongiorno, Mark Evans, Susan Harris-Rimmer, Anne Tiernan, John Warhurst and George Williams examine the institutions, the issues and the leaders at the heart of this crisis.

It is crucial reading for champions of liberal democracy.

From Turnbull to Morrison: The Trust Divide is the thirteenth volume of Australia's longest running study of Australian Commonwealth Government, started in 1983.
Mark Evans (Author)
Mark Evans is professor of governance at the University of Canberra and Director of the Democracy 2025: Bridging the Trust Divide initiative at the Museum of Australian Democracy at Old Parliament House. Mark was formerly Director of the Institute for Governance at the University of Canberra and the Worldwide Universities Public Policy Network and Head of Politics at the University of York in the UK. His most recent books include Evidence-based Policymaking in the Social Sciences and Ten Ways to Save Democracy (both with Gerry Stoker). He has been the senior editor of the international journal Policy Studies since 2004.

Michelle Grattan (Author)
Michelle Grattan is one of Australia's most respected political journalists. She has been a member of the Canberra parliamentary press gallery for more than 40 years, during which time she has covered all the most significant stories in Australian politics. As a former editor of The Canberra Times, Michelle Grattan was also the first female editor of an Australian daily newspaper. She has been with the Australian Financial Review, The Sydney Morning Herald and political editor of The Age since 2004. Michelle currently has a dual role with an academic position at the University of Canberra and as associate editor (politics) and chief political correspondent at The Conversation.