It Wasn't So Jolly: The Story of the Jolly Rogers and the James Horner Crew 1942-1945 (Paperback) 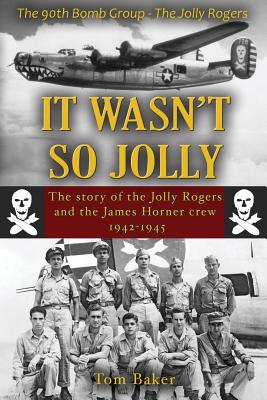 It Wasn't So Jolly: The Story of the Jolly Rogers and the James Horner Crew 1942-1945 (Paperback)

This is the story of the 90th Bomb Group of the US 5th Air Force, nicknamed the Jolly Rogers, and the James Horner bomber crew, as told to the author by three surviving crew members, all in their 90s today. It records the experience of the men and the history of the Group in the Pacific theater in World War II, from 1942-1945. Formed in the aftermath of the Pearl Harbor attack, the 90th Bomb Group was equipped with the new four-engine Consolidated B-24 bomber, which many crewmen did not trust at first, since it had not been proven in battle like the more famous B-17. Faith in their bomber would only come with combat experience. Present from the inception of the Group was Major Arthur H. Rogers, who recognized that the firepower of the bomber was weak toward the front, since the gun in the nose was only a single hand-operated machine gun on a swivel. Japanese fighter plane pilots also realized this weakness and made their attacks from the front, shooting down several of the 90th's bombers before Maj. Rogers was able to mount a power turret on the nose of the B-24, a quest he had to pursue on his own, since the factory rejected the idea at first. Rogers managed to graft a tail turret onto the nose of his personal bomber, "Connell's Special," and took it into combat alone to prove its worth. Rogers recruited his gunners from farm boys, bootleggers, backwoods hunters, and anyone who could prove to him that he could accurately fire a gun at a moving target. Rogers' own bomber was crewed by such men, and he often went out on lone missions spoiling for a fight with the Japanese. He also became skilled at skip-bombing Japanese ships, which required great courage, since the plane had to be flown straight at the side of an enemy ship at wavetop height, the bombs released early to skip across the water, and then a pullup over the mast of the ship as the bombs slammed into its side. The 90th Bomb Group became known as the Jolly Rogers in 1943, named after their commander, Art Rogers. All 48 of the Group's bombers had to be flown over 7,000 miles from San Francisco to Australia, and from there up into the Southwest Pacific war zone, where at least one of the crews fell victim to native cannibals after crashing in the jungle. One crew was commanded by Lt. James Horner, and he and two of his crewmen provide first-hand accounts of many of their missions. General George Kenney, commander of the Southwest Pacific air forces, promoted Art Rogers to the rank of Colonel and supported his experiments with the armament and performance improvements to the B-24. Kenney also employed a mechanical genius named "Pappy" Gunn to modify twin-engine bombers, B-25 Mitchells and A-20 Havocs, into potent strafer/bombers by filling their noses with machine guns and having them drop streams of parafrag bombs (bombs attached to parachutes) that Kenney had invented himself, which devastated Japanese airfields and the aircraft parked on them. While the Jolly Rogers B-24s dropped bombs of up to 2,000 pounds from higher altitude, the B-25 and A-20 strafer/bombers went in at treetop height to shoot up Japanese airfields, and this one-two punch wrought devastation on Japanese installations from New Guinea to the Philippines. Much of the story is told in Art Rogers' own words, from his previously-unpublished memoirs, furnished to the author by Rogers' family. First-hand accounts of many other pilots and crewmen are included in this factual and action-packed book. Many of the more than 375 photographs were furnished by Robert Tupa, whose grandfather was in the Jolly Rogers' photo section and preserved many photos that have never before been published in books until now. The Horner crew's training in the States, their flight overseas to the war zone, their baptism under fire, their life in camp, and their leaves in Australia are all described in this book.