Operation Jubilee: Dieppe, 1942: The Folly and the Sacrifice (Hardcover) 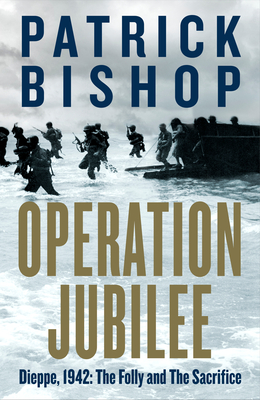 Operation Jubilee: Dieppe, 1942: The Folly and the Sacrifice (Hardcover)


Email or call for price - This maybe out of print or used
In the tradition of Ben Macintyre, Tim Cook, and other bestselling World War Two historians, a riveting and updated telling of the tragic Dieppe raid of 1942.

On the moonless night of August 18th 1942 a flotilla pushes out into the flat water of the Channel. They are to seize the German-held port of Dieppe and hold it for at least twenty-four hours, showing the Soviets the Allies were serious about a second front and to get experience ahead of a full-scale invasion. But confidence turned to carnage with nearly two thirds of the attackers dead, wounded or captured. The raid - the Royal Air Force's biggest battle since 1940- was both a disaster and a milestone in the narrative of the war. It was cited as essential to D-Day, but the tragedy was all too predictable.

Using first-hand testimony and highlighting recently declassified source material from archives across several countries, bestselling author Patrick Bishop's account of this doomed endeavour reveals the big picture and unearths telling details that fully bring Operation Jubilee to life for the first time.
Patrick Bishop spent twenty-five years as a foreign correspondent covering conflicts around the world. He is the author of two hugely acclaimed books about the Royal Air Force during the Second World War, Fighter Boys and Bomber Boys. His other books include Wings, a history of the RAF; and Air Force Blue, which celebrated 100 years of the RAF and was a Sunday Times (UK) bestseller.
“Patrick Bishop’s well-researched, crisply written and utterly absorbing account of the Dieppe raid tells a story of heroism and futility that will live for the reader long afterwards. Operation Jubilee was all the more tragic for having been entirely avoidable, in ways reasons that Bishop sets out powerfully, unflinchingly and unanswerably”
—Andrew Roberts, author of Churchill: Walking with Destiny

“Riveting and powerfully written. Patrick Bishop has turned this tragic cautionary tale into a fascinating, shrewd and timely reflection on leadership in a time of crisis, and what can happen to personal ambition in the fevered atmosphere of war”
—Henry Hemming, author of Our Man in New York

“Operation Jubilee is written with verve and knowledge, and with the author’s trademark style of integrating eyewitness accounts with insight into the human condition in battle. It draws upon new evidence and provides a new perspective on the French civilians. Recommended reading”
—Tim Cook, author of The Fight for History