The Irony of Vietnam: The System Worked (Brookings Classic) (Paperback) 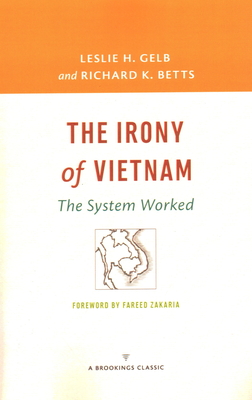 The Irony of Vietnam: The System Worked (Brookings Classic) (Paperback)

If a historian were allowed but one book on the American involvement in Vietnam, this would be it. -- Foreign Affairs When first published in 1979, four years after the end of one of the most divisive conflicts in the United States, The Irony of Vietnam raised eyebrows. Most students of the war argued that the United States had stumbled into a quagmire in Vietnam through hubris and miscalculation, as the New York Times's Fox Butterfield put it. But the perspective of time and the opening of documentary sources, including the Pentagon Papers, had allowed Gelb and Betts to probe deep into the decisionmaking leading to escalation of military action in Vietnam. The failure of Vietnam could be laid at the door of American foreign policy, they said, but the decisions that led to the failure were made by presidents aware of the risks, clear about their aims, knowledgeable about the weaknesses of their allies, and under no illusion about the outcome.

The book offers a picture of a steely resolve in government circles that, while useful in creating consensus, did not allow for alternative perspectives. In the years since its publication, The Irony of Vietnam has come to be considered the seminal work on the Vietnam War.

Leslie H. Gelb is among America's most prominent foreign policy experts. A Pulitzer Prize winner, former correspondent for the New York Times, and senior official in the state and defense departments, he is currently president emeritus and board senior fellow at the Council on Foreign Relations, where he served as president from 1993 to 2003. When he conceived of The Irony of Vietnam, which was awarded the American Political Science Association's Woodrow Wilson Award, he was a senior fellow at the Brookings Institution. Richard K. Betts is an adjunct senior fellow for national security studies at the Council on Foreign Relations, the Arnold A. Saltzman professor of war and peace studies, as well as director of the Saltzman Institute of War and Peace Studies, and director of the international security policy program in the School of International and Public Affairs at Columbia University. On the faculty of Harvard University when he began work on The Irony of Vietnam, he completed it while a senior fellow at the Brookings Institution.