The Golden Couple: A Novel (Hardcover) 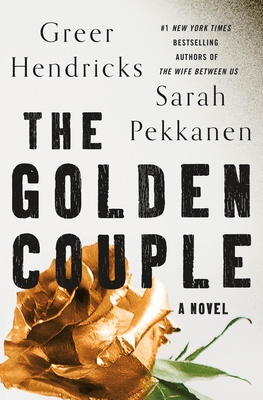 The Golden Couple: A Novel (Hardcover)

“This dynamic duo did not disappoint with another twisty psychological domestic thriller. I love the psychological, unconventional approach Avery has with clients. Sometimes the unconventional way can lead to dangerous results.”
— Stephanie Csaszar, Books Around the Corner, Gresham, OR

The next electrifying novel from the #1 New York Times bestselling author duo behind The Wife Between Us.

"Propulsive and thrilling....A page-turner that will keep you guessing until the very end." --Taylor Jenkins Reid, author of Malibu Rising

Wealthy Washington suburbanites Marissa and Matthew Bishop seem to have it all—until Marissa is unfaithful. Beneath their veneer of perfection is a relationship riven by work and a lack of intimacy. She wants to repair things for the sake of their eight-year-old son and because she loves her husband. Enter Avery Chambers.

Avery is a therapist who lost her professional license. Still, it doesn’t stop her from counseling those in crisis, though they have to adhere to her unorthodox methods. And the Bishops are desperate.
When they glide through Avery’s door and Marissa reveals her infidelity, all three are set on a collision course. Because the biggest secrets in the room are still hidden, and it’s no longer simply a marriage that’s in danger.

"An utterly compelling, spellbinding read." --Lisa Jewell, author of Then She Was Gone and Invisible Girl

GREER HENDRICKS is the #1 New York Times bestselling co-author of The Wife Between Us, An Anonymous Girl, You Are Not Alone and The Golden Couple. Prior to becoming a novelist, she obtained her master’s degree in journalism at Columbia and spent two decades as an editor at Simon & Schuster. Her writing has appeared in the New York Times, Allure, Publishers Weekly and other publications. She lives in Manhattan with her husband and two children.

SARAH PEKKANEN is the #1 New York Times bestselling co-author of several novels of suspense including An Anonymous Girl and The Wife Between Us, and the internationally and USA Today bestselling author of over half a dozen solo novels. A former investigative journalist and award-winning feature writer, her work has been published in numerous national magazines and newspapers. She lives just outside of Washington, D.C. with her family.

Mystery Tribune’s Book of the Day
One of E! Online's Best of March titles
One of Mystery & Suspense Magazine’s Best Books of 2022
One of Goodreads Readers’ Most Anticipated Mysteries of 2022
One of the Nerd Daily’s The Most Anticipated 2022 Book Releases
One of Parade’s 28 Books We're Loving This Season
One of GMA.com’s 15 March Reads to Get You Through the Month
One of PopSugar’s 66 Thrillers That Will Give You Goosebumps, Best New Books of 2022 So Far, and 35
Must-Read Thrillers and Mystery Books to Keep You Chasing Clues in 2022

“Suspenseful. This one represents the high standard of their early nail-biters.” –Publishers Weekly

"The ending made total wacky sense — and was a complete surprise." --The New York Times

“The next Gone Girl.” –Reader’s Digest

"Wickedly clever... Hendricks and Pekkanen (The Wife Between Us) expertly build narrative tension... in this propulsive thriller." -- Shelf Awareness

"My favorite kind of thriller: a guessing game filled with characters you care about and twists you don't see coming. An utterly compelling, spellbinding read." –– Lisa Jewell, author of Then She Was Gone and Invisible Girl


“Part domestic psychological drama, part cat-and-mouse page turner, The Golden Couple is one of those fiction books you might expect to devour in a weekend. The twisty tale of lies, lies, and more lies is perfect for fans of Liane Moriarty and Paula Hawkins.” –RD.com


"The Golden Couple is a propulsive, twisty, unputdownable thriller - with two heroines you won't be able to get enough of... and a twist you'll never see coming. Greer Hendricks and Sarah Pekkanen have outdone themselves!" ––Laura Dave, author of The Last Thing He Told Me

"The Golden Couple is propulsive and thrilling. It grabbed me from the first page and didn't let go. A page-turner that will keep you guessing until the very end." –– Taylor Jenkins Reid, author of Malibu Rising and Daisy Jones & the Six

"The Golden Couple is a riveting cat-and-mouse game of a novel that explores the intricacies of marriage, and the many ways in which people lie to themselves...and others. This is a psychological thriller in every sense of the word." –– Lori Gottlieb, author of Maybe You Should Talk to Someone

"Superior prose and intricate plot lines... [a] riveting story, "The Golden Couple" will suck you in." --Zibby Owens