Apples to Oregon: Being the (Slightly) True Narrative of How a Brave Pioneer Father Brought Apples, Peaches, Pears, Plums, Grapes, and Cherries (and Children) Across the Plains (Paperback) 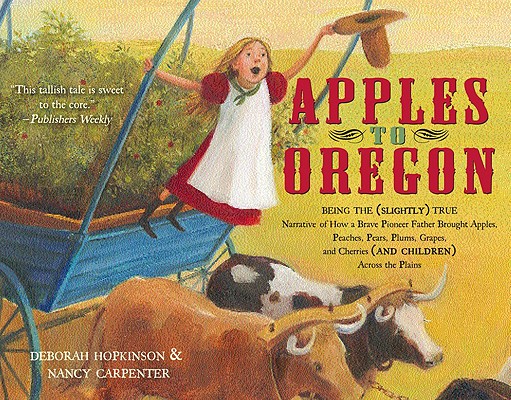 Apples to Oregon: Being the (Slightly) True Narrative of How a Brave Pioneer Father Brought Apples, Peaches, Pears, Plums, Grapes, and Cherries (and Children) Across the Plains (Paperback)


Backordered
The slightly true narrative of how a brave pioneer father brought apples, pears, plums, grapes, and cherries (and children) across the plains.

When Papa decides to pull up roots and move from Iowa to Oregon, he can’t bear to leave his precious apple trees behind. Or his peaches, plums, grapes, cherries, and pears. Oh, and he takes his family along too.

But the trail is cruel. First there’s a river to cross that’s wider than Texas, then there are hailstones as big as plums, and then there’s even a drought, sure to crisp the cherries.

Luckily Delicious (the nonedible apple of Daddy’s eye) won’t let anything stop her father’s darling saps from tasting the sweet Oregon soil. A hilarious tall tale from the team that brought you Fannie in the Kitchen that’s loosely based on the life of a real fruiting pioneer.
Deborah Hopkinson is the author of numerous award-winning children's books, including Sweet Clara and the Freedom Quilt, winner of the International Literacy Association Award; Girl Wonder, winner of the Great Lakes Book Award; and Apples to Oregon, a Junior Library Guild Selection. She received the 2003 Washington State Book Award for Under the Quilt of Night. She lives in Oregon. Visit her online at DeborahHopkinson.com.

Nancy Carpenter is the acclaimed illustrator of Thomas Jefferson and the Mammoth Hunt, Queen Victoria’s Bathing Machine, Fannie in the Kitchen, and Loud Emily, among other books. Her works have garnered many honors, including two Christopher Awards and the Jane Addams Children’s Book Award. She lives in Brooklyn, New York. Visit her at NancyCarpenter.website.
Publishers Weekly, starred review Prepared to perfection and served up with style, this historical nugget imagines an interlude in the life of cookbook pioneer Fannie Farmer.

Philadelphia Inquirer A happy combination of text and art.

School Library Journal, starred review A whimsical look back to when it all began.