Heart of a Patriot: How I Found the Courage to Survive Vietnam, Walter Reed and Karl Rove (Paperback) 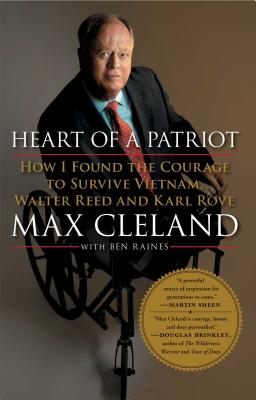 Heart of a Patriot: How I Found the Courage to Survive Vietnam, Walter Reed and Karl Rove (Paperback)

By Max Cleland, Ben Raines (With)


Usually Ships in 2-3 Days
By the time he had reached middle age, Max Cleland thought he had nothing to live for. Vietnam had left him a triple amputee. He had lost his seat in the U.S. Senate, and in the grip of depression he had lost his fiancée, too. But instead of giving up, Cleland discovered that he has what it takes to survive: the heart of a patriot.

Doctors did not give Cleland much hope when he returned from Vietnam, but he overcame his despair through his bonds with other wounded soldiers. Against all odds, he realized his dream of becoming a Senator. But after being smeared as unpatriotic in a reelection campaign, a long-dormant case of Post-Traumatic Stress Disorder sent him back to Walter Reed Hospital. Surrounded by the veterans of Iraq and Afghanistan, Cleland again found the faith and endurance to regain control of his life.

In a gut-wrenching memoir that is free of bitterness but frank about the costs of being a soldier, Max Cleland describes with love the ties America’s soldiers forge with one another, along with the disillusionment many of them experience when they come home. Heart of a Patriot is a story about the joy of serving the country you love, no matter the cost—and how to recover from the deepest wounds of war.
Max Cleland is a Vietnam War veteran and former U.S. Senator from Georgia who has served as the head of the Veterans Administration and on the 9/11 Commission. He became Secretary of the American Battle Monuments Commission in 2009.

Ben Raines is an award-winning environmental journalist, filmmaker, and charter captain. He lives with his wife in Fairhope, Alabama.
“The book is crisply written . . . Cleland and Ben Raines have produced an emotional and provoking book that fits his remarkable story into the broader context of the state of American politics since World War II. It is oftentimes uncomfortable, but always compelling.”
—Scotty E. Kirkland, The Mobile Press-Register (Alabama)

“Filled with bravery on many fronts and perseverance in life.”
—New Pittsburgh Courier

“A true profile in courage for our time.”
—Senator Ted Kennedy

“Deeply moving and uplifting . . . Cleland is as big a man as you’ll ever meet.”
—Jon Land, Providence Journal-Bulletin (Rhode Island)

“A powerful testament to one veteran’s struggles and successes… A classic American triumph.”
—Roll Call