Godwink Christmas Stories: Discover the Most Wondrous Gifts of the Season (The Godwink Series #5) (Hardcover) 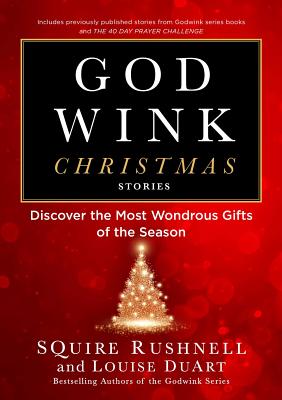 Godwink Christmas Stories: Discover the Most Wondrous Gifts of the Season (The Godwink Series #5) (Hardcover)

This is book number 5 in the The Godwink Series series.

New York Times bestselling author SQuire Rushnell and his wife Louise DuArt share 21 brand-new and 9 classic true-life stories of extraordinary “Godwinks” at Christmastime, proving that what some thought was “coincidence” wasn't coincidence at all, but a supernatural “hotline” from God.

Think back to when you were a kid and someone you loved gave you a little wink across the dining room table, like Mom or Dad or Grandma. You didn't say, “What do you mean by that?” You knew. It meant: “Hey kid, I'm proud of you.” That's what a Godwink is: a message of reassurance from above, directly to you, out of seven billion people on the planet, saying “Hey kid...I have you on my mind right now. I love you. You’re never alone.”

A Godwink can be an unexpected connection to someone you love, a mysterious pathway to a life-changing opportunity, unanticipated income out of the blue, or an answered prayer that makes you say “wow”! Godwinks let you know that God is always extending you a tangible connection to Him, like a firm handrail on dark, wobbly stairs.

Now, just in time for the holiday season, comes Godwinks Christmas Stories, a collection of astonishing true-life stories centered around Christmas that demonstrate how God has shown Himself in the lives of others. He’ll do the same for you. Husband and wife authors SQuire Rushnell and Louise DuArt remind you that Godwinks are like wondrous gifts left on your doorstep. Their aim with this book is to help you open the door and open your gifts of hope and encouragement.
SQuire Rushnell is a popular speaker and New York Times bestselling author who has coined the term “Godwink,” now in mainstream usage. Within more than one million books in print, SQuire’s Godwink stories are a popular monthly feature on the NBC Today Show. He has also appeared on several national television programs including Fox News Channel’s Fox & Friends and CBS Sunday Morning. As a veteran ABC Television Network executive, he led Good Morning America to the number one spot and oversaw the acclaimed Schoolhouse Rock! series and the ABC Afterschool Specials. Programs under his direction have captured more than seventy-five Emmy Awards.

Louise DuArt costarred with Tim Conway and Harvey Korman in sold-out performances for fifteen seasons. Clean and funny, Louise executes fast-paced conversations between herself and Bart Simpson, Judge Judy, Barbra Streisand, Hillary Clinton, and dozens more. She was a popular Women of Faith speaker and has coauthored three books with her husband, SQuire. She hosted a popular daily talk show on the ABC Family channel for eight seasons, Living the Life, and has starred in various Broadway productions, garnering rave reviews.