All About Particles: A Handbook of Japanese Function Words (Paperback) 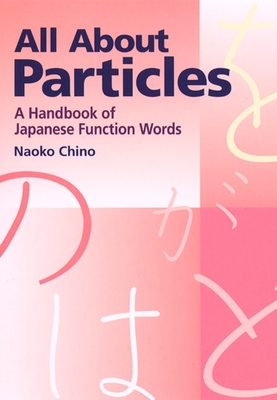 All About Particles: A Handbook of Japanese Function Words (Paperback)


Usually Ships in 2-3 Days
Students of Japanese are familiar with the term "particle," and realize that they, like English prepositions, require a special effort to master. This handbook provides all the information one would need on these tricky units of grammar.


All About Particles covers more than 70 particles those that are used regularly as well as those used less frequently in more than 200 uses. The book can be approached as a guiding textbook and studied from beginning to end. It is as a reference book, however, that
All About Particles shines. It is light and easy to carry, slim enough to fit into the corner of a shoulder bag, and concise enough to quickly clarify particle-related questions. It is a priceless tool for any serious student of Japanese.


In its previous incarnation as a part of the Power Japanese Series,
ISBN 978-0-87011-954-5, and sold more than 40,000 copies worldwide.
NAOKO CHINO is a lecturer at Sophia University, Tokyo, and author of Japanese Verbs at a Glance, A Dictionary of Basic Japanese Sentence Patterns, and How to Tell the Difference Between Japanese Particles.