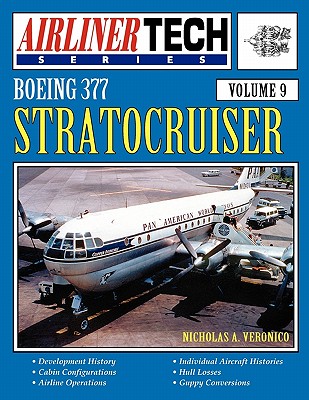 
Usually Ships in 2-3 Days
Boeing's model 377 was developed from the World War II B-29 bomber. Named the Stratocruiser, this four-engine passengerliner bridged the gap for Boeing from war-time production to the introduction of the all-jet 707 in the late 1950s. The Stratocruiser, which set the standards for luxury air travel, represents a romantic era in the golden age of commercial aviation. The plane was equipped with sleeper seats, fold-down berths, and a 14-passenger lounge below the main deck that was reached by descending a spiral staircase. Such amenities would not be seen again until the early 1970s when Boeing's 747 came on line. For aviation enthusiasts. The photos in this edition are black and white.