A Thousand May Fall: Life, Death, and Survival in the Union Army (Hardcover) 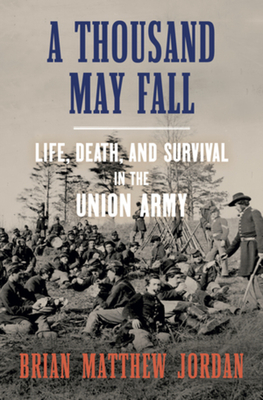 A Thousand May Fall: Life, Death, and Survival in the Union Army (Hardcover)

From a Pulitzer Prize finalist, a pathbreaking history of the Civil War centered on a regiment of immigrants and their brutal experience of the conflict.

The Civil War ended more than 150 years ago, yet our nation remains fiercely divided over its enduring legacies. In A Thousand May Fall, Pulitzer Prize finalist Brian Matthew Jordan returns us to the war itself, bringing us closer than perhaps any prior historian to the chaos of battle and the trials of military life. Creating an intimate, absorbing chronicle from the ordinary soldier’s perspective, he allows us to see the Civil War anew—and through unexpected eyes.

At the heart of Jordan’s vital account is the 107th Ohio Volunteer Infantry, which was at once representative and exceptional. Its ranks weathered the human ordeal of war in painstakingly routine ways, fighting in two defining battles, Chancellorsville and Gettysburg, each time in the thick of the killing. But the men of the 107th were not lauded as heroes for their bravery and their suffering. Most of them were ethnic Germans, set apart by language and identity, and their loyalties were regularly questioned by a nativist Northern press. We so often assume that the Civil War was a uniquely American conflict, yet Jordan emphasizes the forgotten contributions made by immigrants to the Union cause. An incredible one quarter of the Union army was foreign born, he shows, with 200,000 native Germans alone fighting to save their adopted homeland and prove their patriotism.

In the course of its service, the 107th Ohio was decimated five times over, and although one of its members earned the Medal of Honor for his daring performance in a skirmish in South Carolina, few others achieved any lasting distinction. Reclaiming these men for posterity, Jordan reveals that even as they endured the horrible extremes of war, the Ohioans contemplated the deeper meanings of the conflict at every turn—from personal questions of citizenship and belonging to the overriding matter of slavery and emancipation.

Based on prodigious new research, including diaries, letters, and unpublished memoirs, A Thousand May Fall is a pioneering, revelatory history that restores the common man and the immigrant striver to the center of the Civil War. In our age of fractured politics and emboldened nativism, Jordan forces us to confront the wrenching human realities, and often-forgotten stakes, of the bloodiest episode in our nation’s history.

Brian Matthew Jordan is an associate professor of history at Sam Houston State University. His first book, Marching Home: Union Veterans and Their Unending Civil War, was a finalist for the Pulitzer Prize for History. He lives in Willis, Texas.
Jordan has constructed a humanistic history of how ordinary men became soldiers under extraordinary circumstances none could have foreseen . . . In giving the men of the 107th their hard-earned place in history, Jordan has set a high bar for future historians to meet and a template for exceptional historians to follow.
— Gordon Berg - Civil War Times

Jordan's talent for vivid narrative rivals John Keegan's . . . The story of the 107th Ohio is not one of adventure, brave charges, and celebrations. But this is what makes it a welcome and essential contribution to the scholarship on the common soldier . . . The true strength of his book is its evocation of the dizzyingly complex experience of the men who fought to preserve the Union.
— Angela M. Riotto - Michigan War Studies Review

Historian Jordan (Marching Home) delivers a captivating chronicle of the 107th Ohio Volunteer Infantry during and after the Civil War.... Jordan portrays Ohio as a hotbed of antiwar sentiment; details how one private in the 107th won the Medal of Honor; and recounts the lengths veterans went to in order to secure pensions and medical benefits for themselves and their loved ones.... Jordan profiles his characters with precision, revealing the deep emotional and physical scars they carried back from the conflict. This meticulous and engrossing history brings the Civil War to vivid life.

The personal sacrifice of soldiers in war often gets lost in military histories, and Jordan's moving account of the 107th Ohio is a welcome corrective.
— Library Journal

Movingly, [Jordan] writes in an epilogue of a reunion of the regiment at Gettysburg, when the men ‘gripped walking sticks, not rifled muskets’ and remembered their fallen brothers in arms. A well-conceived, thoughtfully written contribution to Civil War history.
— Kirkus Reviews

A Thousand May Fall is a scholarly and literary achievement, a unique study not only of a Civil War regiment, but perhaps also the deepest probing ever of the experience of soldiers in that awful war. Jordan writes about the men of the 107th Ohio as though he became their neighbors, their confidant, their scribe. We learn the political impulses of these mostly German-born men, especially about slavery. The research is almost unfathomable in its granular depth, and the story a journey into the lived physical and medical reality of war. Above all, Jordan has written a singular study of human emotions under the greatest sustained pressures.

Like many other regiments in the 11th Corps of the Army of the Potomac, the 107th Ohio was composed mostly of German-Americans and shared the Corps’ unhappy role as scapegoat for the army’s defeat at Chancellorsville and the first day at Gettysburg. This stigma shaped much of the regiment’s experience, which was otherwise typical of Civil War soldiering. In this splendid regimental history, Brian Matthew Jordan gives color and texture to that hard-knock experience.
— James M. McPherson, Pulitzer Prize–winning author of Battle Cry of Freedom: The Civil War Era

Prodigiously researched and elegantly crafted, Brian Matthew Jordan’s A Thousand May Fall chronicles the lives of the men of the 107th Ohio, a regiment roughly seventy percent foreign-born. Unlike many midwestern units that fought for abolition as much as reunion, the ‘ethnically German’ regiment remained loyal to the Democratic Party and believed that nativism, and not unfree labor, presented the greatest danger to American liberties. Jordan’s vivid prose and engaging narrative brings his characters and battlefields to life. A powerful and moving story.