Last On His Feet: Jack Johnson and the Battle of the Century (Hardcover) 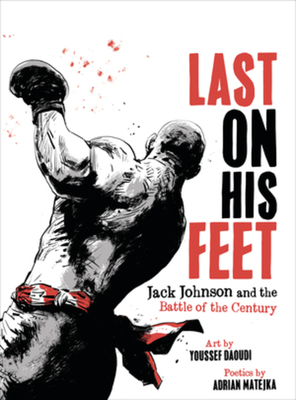 Last On His Feet: Jack Johnson and the Battle of the Century (Hardcover)

A publishing event, the much-awaited graphic portrait of early-twentieth-century boxer Jack Johnson and the tortured world in which he lived.

On the morning of July 4, 1910, thousands of rabid fans stormed a newly built stadium in Reno, Nevada, to bear witness to the “Battle of the Century.” At the height of the Jim Crow era, Jack Johnson, the world’s first Black heavyweight champion—and most infamous athlete in the world because of his race—was paired against Jim Jeffries, a former heavyweight champion then heralded as the “great white hope,” who could restore the racial hierarchy that Johnson had shattered. Offering front-row seats to this historic showdown, artist Youssef Daoudi and poet Adrian Matejka intersperse dramatic boxing action with vivid flashbacks to reveal how Johnson, the self-educated son of emancipated slaves, reached the pinnacle of sports—all while facing down a racist justice system. Through the legerdemain of breathtaking illustrations and soul-numbing verse, Last on His Feet restores dignity to a contentious civil rights figure who has for more than a century been denied his proper due.

is the author of The Big Smoke, which won the Anisfield-Wolf Book Award and was a finalist for the Pulitzer Prize and a National Book Award. He teaches creative writing at Indiana University in Bloomington.

Youssef Daoudi, a comic artist, writer and illustrator, is the author of Monk!. Previously, he was an art director for multinational advertising firms.