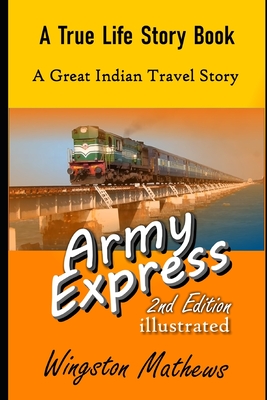 
Backordered
This book is Non-returnable.
The Army Express is a great Indian train travel story of an entire army unit with 1600 people on the train. The story is about the way the army jams the entire railways with their strict routine and work schedules and took over 11-days to travel a 4-hour journey. This army unit was being moved from a remote village inside a jungle where it was raised to a forward base near a big city. The story revolves around the stand-off between the railway bosses and the army bosses. These two top brass keep getting at each other from the time the train was taken over by the army, till the journey ended eleven days later, leading to some hilarious events all through which kept the entire army and their families entertained. The author tells the story of human relationship of how 1600 army men, women, and their children on the train, who were completely alien to each other before they boarded the train, ladies fighting with each other on the first day, suddenly bond with each other, get disciplined and start respecting each other, becoming truly a large joint family. A real true life story which has been written exactly as it happened five decades ago. The book is fully illustrated with high-quality pictures to give an immersive reading experience.