Madness, Betrayal and the Lash (Paperback) 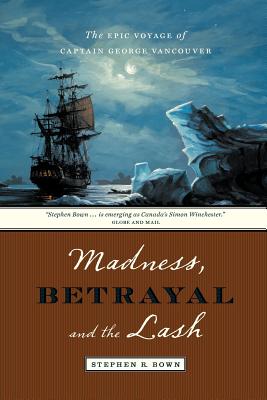 Madness, Betrayal and the Lash (Paperback)


Usually Ships in 2-3 Days
This book is Non-returnable.
A revealing and fresh take on the extraordinary story of Captain Vancouver, one of history's greatest explorers. From 1791 to 1795, George Vancouver sailed the Pacific as captain of a major expedition of discovery and imperial ambition. Under orders to stake Britain's claim to western North America, he valiantly charted the byzantine coastline from California to Alaska. His voyage was one of history's greatest feats of maritime daring, scientific discovery, marine cartography and international diplomacy, involving Spain, Russia, the United States and indigenous Hawaii. But the young captain was harbouring within him the kernels of an illness, not evident when he departed but growing daily like a cancer, that, before killing him, would drive him into uncontrollable rages, leaving him shamed, exhausted, and bedridden. And his triumphs were overshadowed by bitter smear campaigns initiated by enemies he made on board-well-connected gentlemen who were set on destroying his reputation. How could Vancouver have known that his actions on the far side of the world were being secretly reported on, debated and judged by the aristocratic elite? Madness, Betrayal and the Lash is a tale of adventure at sea, the struggle of empires and of one man's battle against illness, the isolation of command and Britain's polarizing class system. In it, Stephen R. Bown offers a long-overdue re-evaluation of one of the greatest explorers of the Age of Discovery. Stephen R. Bown studied history at the University of Alberta. He is the author or co-author of numerous articles and several books, including A Most Damnable Invention, which was shortlisted for the Wilfred Eggleston Award for Non-Fiction and the Canadian Science Writers Association Science in Society Book Award. He lives in the Canadian Rockies.