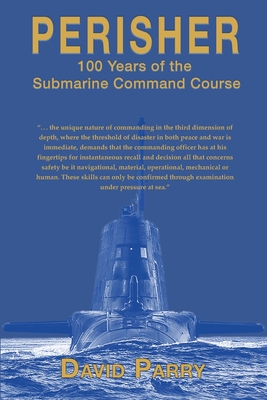 The Royal Navy's Submarine Command Course, or 'Perisher', is a unique course, training, assessing and qualifying officers for submarine command which is, itself, unique, challenging and demanding; the epitome of mission command, with no succour, referral or support in a continuously threatening environment. It is therefore essential that those 'in command' are proven to be worthy and capable of their appointment.

The evolution of 'Perisher' is in recognisable periods: the earliest days, following the submarine's introduction into the Royal Navy, was an autodidactic existence with COs learning from their peers and by experimentation. By 1917 circumstances had conflated to create the Periscope School and the Periscope Course to train and qualify COs whose characteristics were now fully formed. The interwar period was a difficult time, but it produced new submarines and technological innovations just in time for the Second World War and the most intense evolutionary period for 'Perisher'. Post-1945 to 1969 experienced two evolutions: Commander Sandy Woodward's codification of the art of attacking and a shift in emphasis from purely 'periscope eye' attacking toward the development of safety and tactical prowess in students. In the 1970s-1980s, two parallel courses satisfied the demand for COs from an expanding diesel-nuclear submarine fleet using SSKs and then in 1989, an SSN. The final period, 1990-2017 continues today with an all-nuclear Perisher and a curriculum to meet a changing battlespace, new weapons and tactics. Throughout its history, 'Perisher' has shaped the submarine commanding officer and he, in return, has shaped 'Perisher'.