Slow Train to Switzerland: One Tour, Two Trips, 150 Years - And a World of Change Apart (Hardcover) 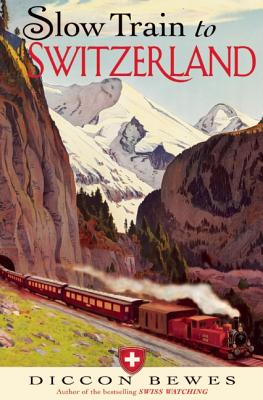 Slow Train to Switzerland: One Tour, Two Trips, 150 Years - And a World of Change Apart (Hardcover)

It was the tour that changed the way we travel. In the summer of 1863 seven people left London on a train that would take them on a thrilling adventure across the Alps. They were the Junior United Alpine Club and members of Thomas Cook's first Conducted Tour of Switzerland. For them it was an exciting novelty; it turned out to be the birth of mass tourism, and it started with the Swiss.

Best-selling author of "Swiss Watching" Diccon Bewes acquires a copy of Alpine member Jemima Morell's journal and travels from London to Lucerne--and back in time. He brings only the journal and the club's nineteenth-century guidebook to retrace their steps one by one, traveling by train whenever possible. Bewes follows the 1863 expedition, experiencing firsthand through Jemima's journal the original British "holiday" that shaped the future of two disparate nations, one a global monarchy and the other a recovering, struggling republic. Alongside vintage illustrations, Bewes creates a fascinating comparison of how people across the globe explore and vacation today. This is also the story of how a nostalgic tour surprised an expat author, revealing a Switzerland very different from the present--and an unexpected personal connection with the diarist in a startling twist. A perfect read for anyone who seeks an expert blend of context and consequence to their travel writing.

Diccon Bewes became a travel writer via the scenic route of bookselling. After ten years at Lonely Planet and "Holiday" magazine, he decamped to Switzerland, where he has until recently managed the Stauffacher English Bookshop in Bern. Following the success of "Swiss Watching," a Financial Times Book of the Year and international bestseller, he is now a full-time writer.

Diccon Bewes is a travel writer. A world trip set him up for a career in travel writing, via the scenic route of bookselling. After ten years at Lonely Planet and Holiday "Which?" Magazine, he decamped to Switzerland, where he has until recently managed the Stauffacher English Bookshop in Bern. In addition to grappling with German, re-learning to cross the road properly, and overcoming his desires to form an orderly line, he has spent the last five years exploring this quirky country. Following the incredible success of "Swiss Watching" he is now a full time writer. See his website at www.dicconbewes.com.