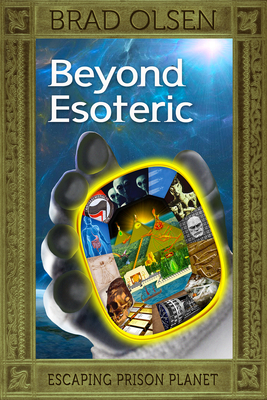 This is book number 3 in the The Esoteric Series series.

Nothing in this world works the way you think it does; there is always more to the story. Be aware that there is a war for your mind and your soul. Corporations have taken over governments in a new form of Fascism that now incorporates high technology and artificial intelligence. The survival of the human race may depend on breaking the Embargo of truth, and collectively developing an ÜberMind. But truth always resonates! Beyond Esoteric takes off the kids gloves, and exposes the control grid extending its tentacles across the planet. The word occult means nothing more than to study the realm of the hidden. So much of real knowledge and wisdom is disguised because the people who run the planet feel that true information of how the world works and how to manifest reality is something you do not need to know. Everything we think we know about the world and the universe in which we live, whatever we have been led to believe concerning the course of human history, could very well be completely wrong, distorted and misinformed. The 19th century teachers of the occult could never have imagined The Ultimate Journey of the 21st century we now face, one that extends far Beyond Esoteric.
Brad Olsen is an award-winning author, book publisher, and event producer.
“A worldwide explorer makes a journey down the rabbit hole connecting the dots and leading us to the undeniable and inspiring conclusion, it’s all in our hands. The Future of Humanity is at stake and we hold the keys. Beyond Esoteric educates and enlightens.” —Kerry Cassidy , Project Camelot, author of REBEL GENE: Secret Space and the Future of Humanity

“A global awakening to the treacherous lies that have kept mankind enslaved and ignorant for millennia is now well underway. The quislings engaged in the coverup of corruption, scandal and subversion are shovelling sand against the tide. Thanks, in no small measure, to modern day prophet Brad Olsen, their time and that of our odious overlords are at an end. Congratulations dear reader. By cracking open Beyond Esoteric: Escaping Prison Planet, you have joined in this glorious restoration.” —Richard Syrett, Broadcaster, Guest-Host Coast to Coast AM

"This kind of brilliant work is what is needed more than anything in the World right now, to open up our eyes to what is really going on. Only deep research and material like this can give us greater awareness, help us to navigate these times with greater discernment and wisdom and help us to take our power back. If we don't understand what we are up against, then we won't be making choices based in clarity or true knowledge and this is what we as humans need in this critical time, where waking up can no longer be delayed. I highly recommend people read this. It is one of the greatest guide books out there that you will get!" —Laura Eisenhower, Author, Astrologer and International Speaker

“’Whoever controls the narrative controls the world.’ This is the powerful idea driving Brad Olsen’s masterful exposé of the deceptive narratives of Earth’s hidden controllers. He systematically lays out the complicity of the mass media in hiding the truth about ruthless population control mechanisms; the historic suppression of free energy; efforts to create an Orwellian New World Order; the existence of extraterrestrial life; and much more. In Beyond Esoteric, Brad provides wise counsel on how to navigate a path through the hidden controllers’ thicket of lies to reach a higher understanding and emancipation.” —Michael Salla, Ph.D. Author of Rise of the Red Dragon

“There are countless guides available today about strange mysteries and secret symbols, but few authors look beyond the surface of these subjects for greater meaning. In these information packed pages, Brad Olsen reveals a stunning guide to our Universe and a unified field theory of metaphysics. This is the result of his extensive research into the dark and mysterious world of the occult; leaving no stone unturned in his never-ending pursuit of hidden mysteries. Most importantly, this book proves that our ancestors possessed lost ancient technologies and that the sciences of today were once the esoteric knowledge of yesterday.” —Jonny Enoch, Esoteric Researcher, and Host on Gaia TV

“As a truth seeker for decades, traveling the world to explore the mysteries of all time, Brad has dedicated his life to revealing that which lies beyond the veil of secrecy. In his third book of the Esoteric Series, Brad holds nothing back! He blows the lid off of the 3D matrix where the deception, delusion and disinformation of a deep, dark agenda have misled humanity for far too long. Gnosis will set us free from the ‘Prison Planet’ so together we can create a New Earth where truth, sovereignty, equality and unity prevail. Brad's book, Beyond Esoteric, gives you the power of knowledge and the freedom from entrapment so you can transcend the matrix!” —Suzanne Ross, Creator of SciSpi.TV, Author of the Up! Trilogy and host of Transcend the Matrix on TFR

​“Brad Olsen’s Esoteric Series ends with ‘esoteric tourism’ at its best with Beyond Esoteric, a cultural exploration into expanded consciousness, quantum mechanics, interdimensional awareness of the visible and the invisible, and much more. A compendium of the best in conspiracy research, you will find interesting anecdotes on the New World Order and all the various Illuminati groups that have generated it, some plausable, others outlandish, but all a part of today’s struggle to achieve a greater awareness in order to free ourselves from this prison planet. —Leo Lyon Zagami, Author of the Confessions of an Illuminati series

“Beyond Esoteric is a portal into the coveted knowledge of everything you ever wanted to know about how the world is controlled and by whom, but didn’t know where to look. Think, Cliff Notes, for world domination! Brad Olsen takes us on a journey into the lesser-known workings of globalization and control, explaining the mechanisms of implementation that we all unknowingly participate in. Control the public narrative and the people will compliantly follow. Within these pages is found the who’s who of neofascism, tracing its financial, political, and ideological roots from Europe to America, continuing at full throttle to the New World Order agendas of today. Chapter after chapter, the depth and complexities of the organizations, structures and methodologies used to control humankind are revealed. Where we come from and more importantly, where we are heading as a country, culture, people and planet is the revelation of this, Brad Olsen’s, finest work.” —Sid Goldberg, two-time Emmy Award winning Director