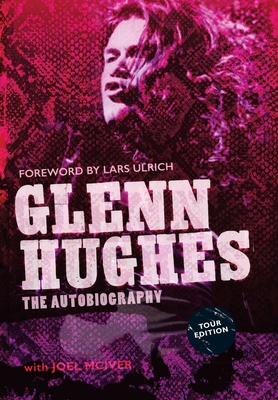 Singer, bassist, and songwriter Glenn Hughes is a living, breathing embodiment of rock music. This is his story - the highs, the lows, and all points in between. The foreword is by Glenn's long-time fan Lars Ulrich, drummer in Metallica.

Previously only available for purchase at Glenn's spoken word event at the Cafe de Paris in London on 25th February 2017, this hardback edition is now available worldwide.

Hughes formed acclaimed funk-rock band Trapeze in the early 1970s, before joining Deep Purple at their commercial peak. Flying the world in the Starship, the band's own Boeing 720 jet, Hughes enthusiastically embraced the rock superstar lifestyle. When the band split in 1976 Hughes embarked on a breakneck run of solo albums, collaborations and even a brief, chaotic spell fronting Black Sabbath. All of this was accompanied by cocaine psychosis, crack addiction and other excesses, before he survived a clean-up-or-die crisis and embarked on a reinvigorated solo career enriched by a survivor's wisdom.