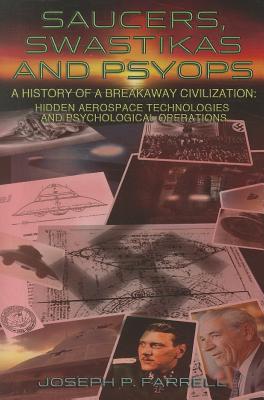 
Usually Ships in 2-3 Days
Oxford-educated historian Farrell continues his best-selling book series on suppressed technology, Nazi survival and the postwar psyops with his new book Saucers, Swastikas and Psyops. Farrell discusses SS Commando Otto Skorzeny; George Adamski; the alleged Hannebu and Vril craft of the Third Reich; The Strange Case of Dr. Hermann Oberth; Nazis in the US and their connections to UFO contactees; The Memes-an idea or behavior spread from person to person within a culture-are Implants; Adamski's ET Message: The Danger of Weaponized Gravity; and tons more.

What do the following things have in common: George Adamski, Fascists, Nazi scientists, American engineers, the CIA, the Wall Street Morgan interests, I.G. Farben, ITT, SS Commando Otto Skorzeny, the post-war Nazi International, American Intelligence and the Mafia Drug Lords? Answer: they are all components of a breakaway civilization seeking to protect its control over advanced technologies and to project itself into outer space while waging a covert war here on earth with the same advanced technologies-and the rest of humanity be damned. Join internationally-known researcher Joseph P. Farrell in this next chapter in his expose of secret Nazi wartime and postwar research that he began in The SS Brotherhood of the Bell and Nazi International.