Iggy Is the Hero of Everything (Hardcover) 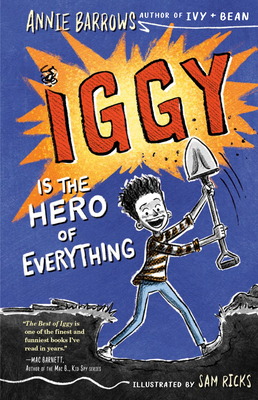 Iggy Is the Hero of Everything (Hardcover)

This is book number 3 in the Iggy series.

The third book in the Iggy series about the lovable troublemaker from New York Times bestselling author of Ivy + Bean.

But are they? It all depends on your point of view.

In the third installment of Annie Barrows's series about the secret joys of causing trouble, readers will learn about the power of interpretation (but we all know who's really right).
Annie Barrows has written either twenty-seven or twenty-nine books, depending on how you define the word “book.”  Most of them are for kids; she has written picture books, chapter books, mid-grade books, and even a book for teenagers. Like Iggy, she would go to great lengths to protect her candy, but unlike Iggy, she would never ever eat a banana Laffy Taffy.

Sam Ricks is the illustrator of the Geisel Award-winner Don't Throw it to Mo! and the Stinkbomb and Ketchup-Face books. He lives with his family in Utah. Twitter @Samuelricks / Website samricks.com
★ “The pace and energy of Barrows’ narrative matches Iggy’s focused enthusiasm for his (somewhat ill-conceived) plan . . . Ricks’ cartoon illustrations are a lively and hilarious complement to Iggy’s thoughts and experiences. . . Iggy’s charm is substantial. . . Genuine and energetic.” —Kirkus Reviews, starred review